On the day we had arranged to meet, Amanat’s lecture was cancelled, but we decided to use the time productively and shoot some images where he is negotiating the university building. First of all we did some shots in the corridors and lift: 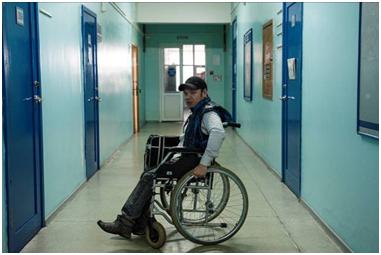 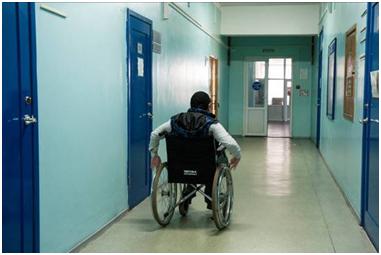 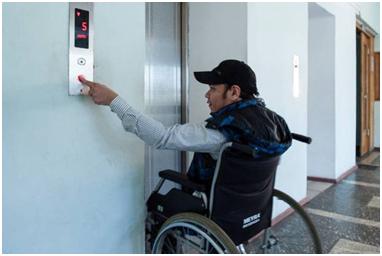 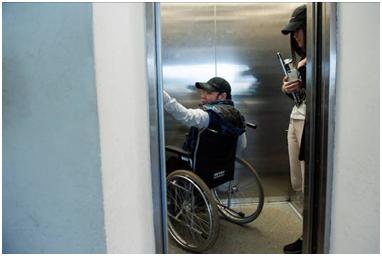 The next place we visited was the refectory, where Amanat bumped into some classmates and they started gossiping about the lecturers! What I like about these images is that they are relaxed, and Amanat is included – since the others are sitting down he is on the same level as well. In many of the images I have tried not to place emphasis on the wheelchair, as in these pictures, you really have to look closely before you notice that Amanat is in one. 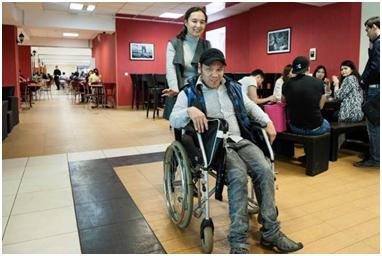 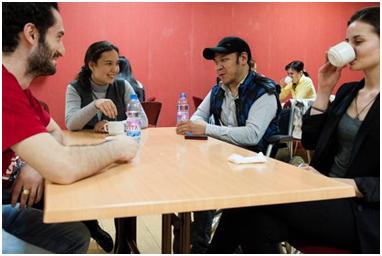 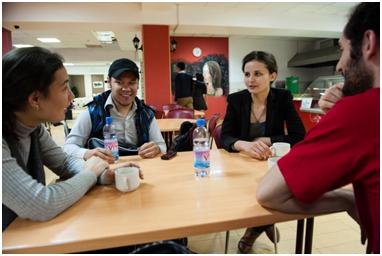 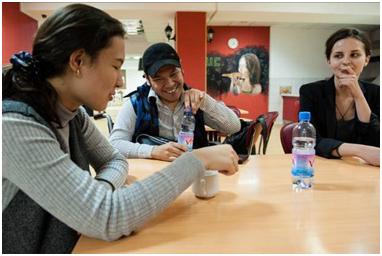 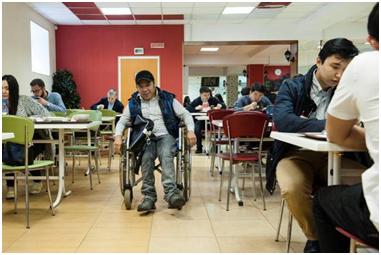 On the way out of the canteen we stopped off to chat to some students who were selling tickets to an upcoming student concert. 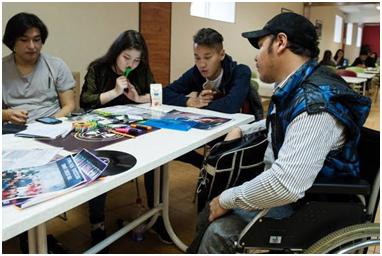 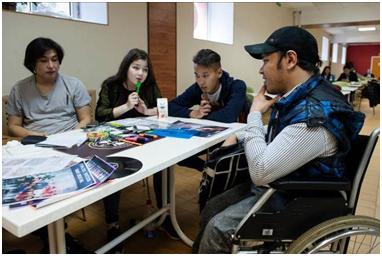 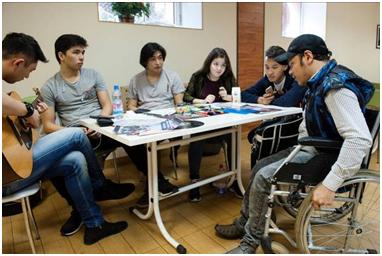 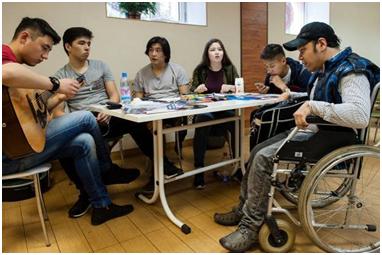 I like the interactive aspect, and the guy with the guitar brings the whole student atmosphere, but I’m not totally happy with the composition somehow – it almost looks staged.

At this point we engaged the assistance of some students to help us access another part of the university. As I mentioned, some parts are accessible with ramps, while others are not: 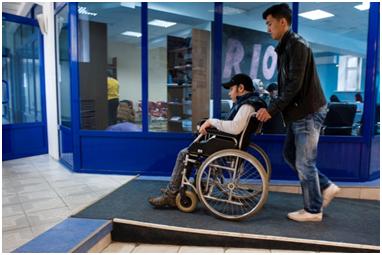 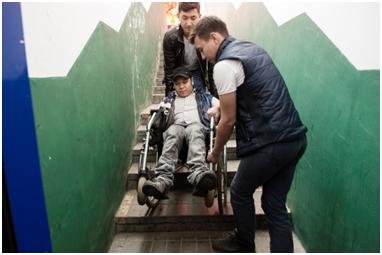 Then we visited the student recreation centre, where some of the lads were playing table football, and Amanat decided to challenge the winner: 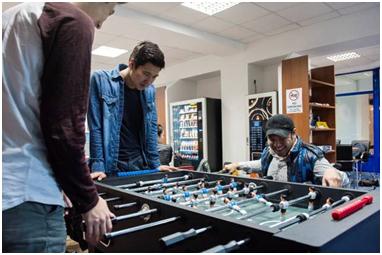 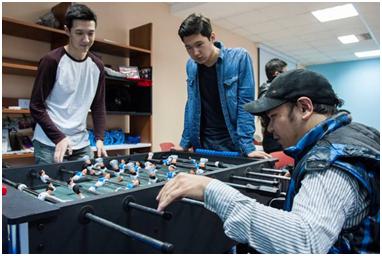 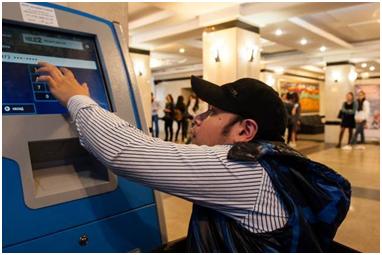 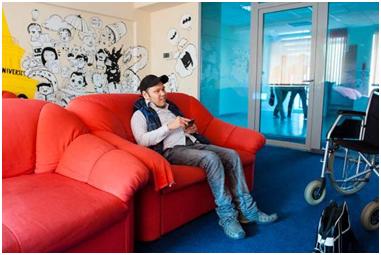 Some of the other areas we visited – not sure if I’ll use these images, but at least the one on the left shows that Amanat is able to use the top-up terminal for his mobile!

Then he asked me to take a picture as he is entering the university, with the name of the building clear in the background. 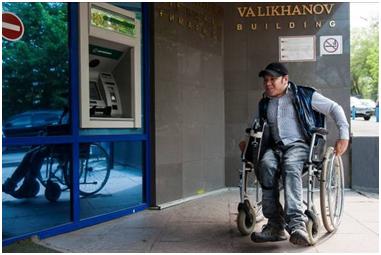 This image works well, since it shows that Amanat is able to access the building, as well as the cash machine being of a height that he is able to use it. The final place we visited was the computer room, where Amanat began working on a presentation that he had to make. I tried out a couple of angles and then left him to it. 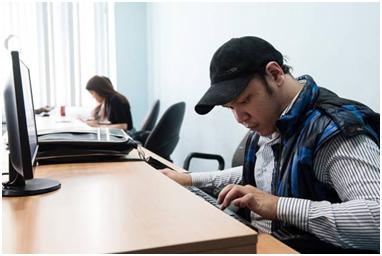 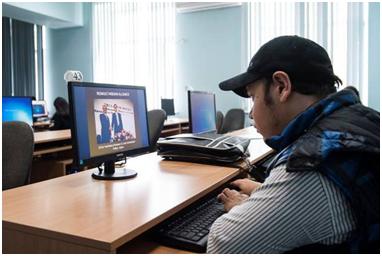 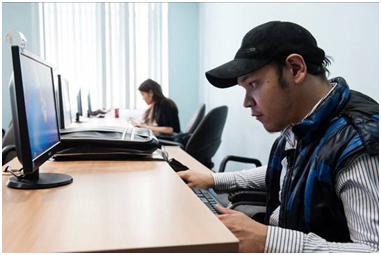 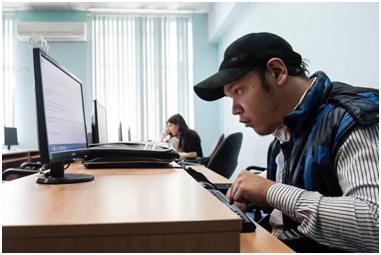 All in all, a productive day’s shooting. I am particularly happy with the images where Amanat is interacting with the other students – it is one thing to be accepted into an educational establishment or workplace, it is quite another thing for the others in that environment not to be prejudiced, as I have been reading (Hyde, 1996).