After a lot of procrastination and delaying tactics, Amanat finally told me that we would not be able to photograph him at home with his family. I had already discussed with my tutor that the domestic images are the ones that lend strength to the project, since they show a side that is not often seen, and demonstrate the extent to which the participants have engaged with the project and welcomed me into their lives and homes. Without the weight of this, the film with Amanat would fail – Les had already told me that I needed to try and get more intimate images with Amanat.

I felt extremely disappointed and let down, because it was Amanat himself who had told me that the other participants were giving up or changing their minds because they had lost their initial enthusiasm and begun to feel ashamed or embarrassed, yet here he was doing exactly the same. I did not insist, but tried to reason with him, explaining that the way to break stereotypes is to show how normal he is. He told me it was not possible and we’d have to shoot some other place. To my mind, part of what makes a project like this work is the fact that those intimate, behind the scenes images are there; this is how we warm to the subjects, since through the device of visual familiarity we find grounds for empathy. I knew that without the family shots the project would lose its gravity. I began to think of how to use an alternative tack, but I had no idea what to do.

Perhaps Amanat later recalled the same things he had told me, because within a couple of days he had changed his tune and called me up to come over and shoot him with his family at home. I was able to get some really nice shots of Amanat with his daughter, Dameli, but his son Altair was a bit more reluctant and that comes across in the images. It’s quite difficult to make an interesting photograph of people playing computer games! What struck me afterwards is how these images will be read by a Western audience. The images show a stylish and neat (if minimalist) interior, contemporary technology (flat screen TV here iPhone in other shots) as well as contemporary fashion (the clothes they are wearing), and I thought back to what Les had said about including some contextual shots. I think there is enough narrative detail in the shots that I have taken for people to observe both the similarities and the differences between Kazakhstan and the West without separately drawing attention to them. 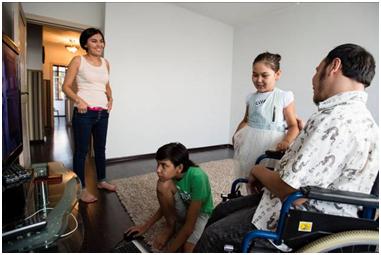 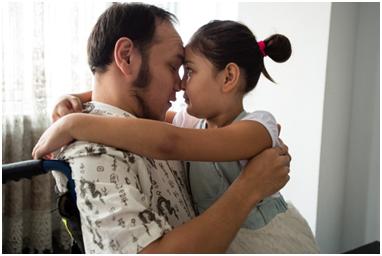 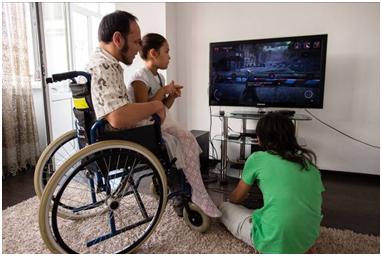 On the other hand, children are so spontaneous, and Dameli is such a lively little performer! After a while we went outside to the recreation area. Initially I wanted to use some of these photos for the final film. Amanat’s wife Meruert took advantage of the moment to climb into the wheelchair and sit on Amanat’s lap!

We wanted to use one of the two images above, where Dameli is looking directly at me and Amanat can be seen in the background. On the other hand, I didn’t feel that there was enough narrative content for the image to work alone, and so I tried combining with one of the images below. Since I had trimmed the section where Amanat is speaking about his family down to 30 seconds (we had agreed that his ‘normal’ family would not be the focus of our film, and this was confirmed in my reading about the representation of freaks), and I wanted to include some vernacular family album shots, I could only include 5 slides. I worked and reworked this section until I was happy with how the slides work together. Another issue for me was the juxtaposition of the able-bodied child in the foreground with disabled parent in the background; I wasn’t sure how audiences would interpret this and thus whether it was totally in the spirit of the project. 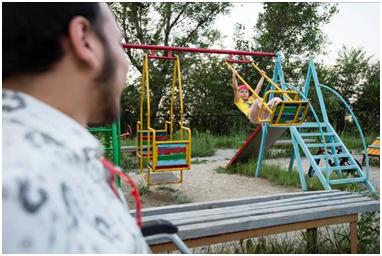 After we had been shooting for a while, Meruert called us in for dinner. Although at the time I shot in the bathroom there was no mention of it, Amanat preferred that I did not use this shot and specifically asked me not to use it.

Photographing inside the kitchen: a typical family sitting down to have a meal together. Amanat’s wheelchair is barely visible, and the stylish kitchen units not only show that this is a contemporary young couple, but the image also hopefully reveals Kazakhstan in a different way than many people in the West are used to seeing (challenging stereotypes that people have of Kazakhs living in yurts!).

Family is very important in Kazakh society, and I really want to use some of these images because they capture a genuine atmosphere of family unity.

After we had eaten, we cleared away the dishes and I interviewed Amanat. To begin with he spoke in general and at length. After the first couple of takes I told him that he needed to be more brief and to the point, as the photofilm would be less than 5 minutes in length. We continued, but it must have taken us 2 hours to get the interview material, and I was less than satisfied with it. By now it was approaching 11pm, and I was far from home in a district that I didn’t know well, so we decided to call it a day and I’d go through the material and if necessary we’d rerecord the portions that needed to be redone.