Reading an article on David Campbell’s website, I came across a link to an article on Duckrabbit which was a discussion of fakery in image making. The photograph below won the prestigious Veolia Environment Wildlife Photographer of the Year 2009 award, but was quickly stripped of the award and the photographer banned for life from entering the competition – because it was suspected (never 100% proved) that the wolf was a tamed one: 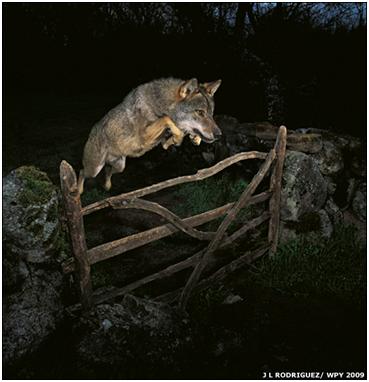 The article then goes on to discuss the work of Marcus Vernaschi, who won first prize at the World Press Awards for a body of work on the narcotics trafficking industry in Guinea-Bissau. The problem is that it seems many of his images were actually staged for the camera. The article here cites a number of images in the series that seem suspect, and refers to the attempts of photographer Jørn Stjerneklar (himself experienced with photographing in Africa) to get to the bottom of it.

The debate was over the following photos: 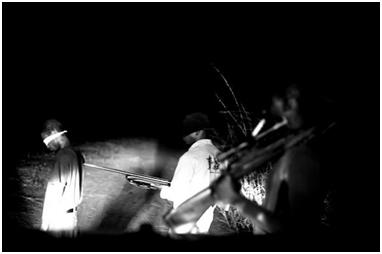 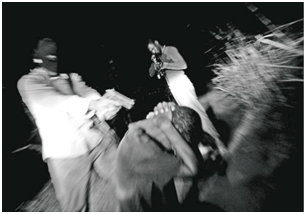 Apart from the discrepancies in MV’s story (the times, the number of photos taken, whether the ‘victim’ was left in the wilderness or sent back) as well as some interesting insights from Stjerneklar (the brilliant whiteness and neatness of the blindfold; the lack of roadblocks in a country in the throes of civil war; the fact that petrol is very rare in Africa, and it is extremely doubtful that the narco gang would waste petrol just to teach a lesson, without actually carrying out the execution…) most importantly, the second picture shows that MV is in the direct line of fire! As Stjerneklar points out: “After having worked in Africa for 30 years as a photographer and covered wars, prostitution, drugs, you name it, me myself would never go in front of a loaded gun in a tense situation, just to take a photograph.” There is also the fact that MV said he had a matter of seconds to take the images – but they are taken with different lenses (the first with a 50mm and the second with a 20-35mm according to the EXIF data) obviously he didn’t have time to switch lenses, but that means he was lugging two D3 bodies with lenses attached into the African countryside at night with a group of men with guns? Seriously? As if to make matters worse, MV has captioned the photographs but doesn’t seem to be convinced himself of the reality of the situation:

‘But he himself is in doubt if the narco gang themselves has arranged the whole situation, and that the victim even is a part of the theatre.’ “I have asked myself that question many times and I don’t have an answer. The guy was left in the middle of nowhere at 3 in the morning and he seemed very scared. That convinced me, that it was not just done to impress me” Marco Vernaschi explains.’ Why does Marco Vernaschi not use all the tools of our profession and his own time to verify the story before he uses captions like “a score is settled between drug dealers”? He has doubts, he says. If you doubt – you investigate.

The more I read the information on the Duckrabbit site, the more it seems that MV is not averse to staging photographs – as is pointed out with his photographs of prostitutes, where the identities of the black women are clearly shown, but the white (model?) is never identified. Who would agree to have such images taken anyway! Are they self portraits?

The problem seems to call into question not only the integrity of the photographer, but also the prize-awarding body, who had no comment to make and did not try to explain how they are convinced that the images are not staged. Stjerneklar even provides MV’s own admission that the corpse of a 10-year old girl was exhumed for him to be able to photograph her! (This photograph has since been removed from the Pulitzer website and MV’s own website)

Campbell looks at staging in photography as well, claiming that all photographs are staged (by this he means that they are somehow constructed by the photographer at the time of shooting as well as in post-production technique, but this sparks off a discussion on his website about just what exactly ‘staging’ means). He looks at a number of images that reveal the extent of staging in the media to reinforce stereotypes: 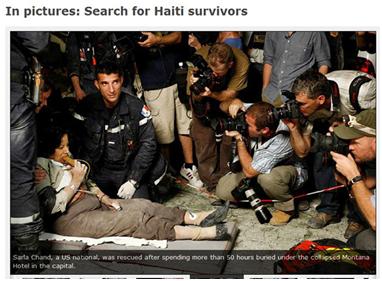 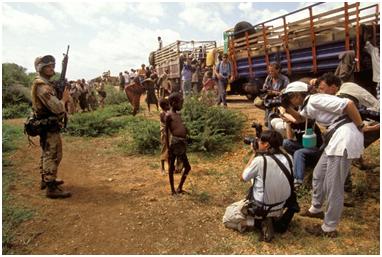 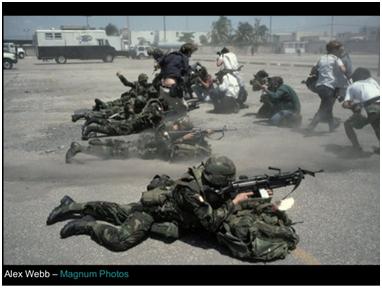 This is nothing new, obviously, but it does call into question the whole of journalism and ethics surrounding the supposed objectivity of what we see and read in the media. Campbell mentions a film by Ruben Salvadori, Photojournalism Behind the Scenes, which looks at how images are hyped up and subjects even playing for the cameras in Palestine. The film is short but gives a tremendous insight into how the media manipulates images without recourse to Photoshop! Campbell even remarks that it surprises him how the public appear to be ‘shocked’ when this kind of media manipulation is revealed to them. Are they really that gullible or ignorant? He even quotes Errol Morris (whose essays I looked at in some depth in the last module) as having written: “All photographs are posed.”

Campbell takes issue not with photographic practice, but with how those images are used in the media, to represent or stand in for the truth, and he puts forth the following: “If we constantly view the essential nature of photographic practice – that it inescapably and unavoidably constructs, enacts, and produces images – as always exceptional and sometimes perverse, we are missing the main problem. That is, how, within a practice that necessarily constructs the world, can we produce authoritative accounts of events and issues?” this is the main problem for journalists. The idea is that the photojournalist has to provide somehow an ‘objective’ picture of the events unfolding, otherwise his honesty and journalistic integrity are called into question. On the other hand, the photographer in the field is not only viewing events through his own cultural and political prism, but he also has an agenda to fulfil, and as Moeller points out, this is a cutthroat business and images need to look a certain way or they aren’t taken up by the editors. Since the photographers know what makes a saleable image, they will look for that kind of shot by default. The same is true of documentarians – people like to believe that what happened in the picture is something that unfolded before the photographer’s eyes, and he just happened to be in the right place at the right time to be able to frame all the elements and make artistic choices of lighting and composition as well as aperture and shutter speed; when the find out that something was set up for the camera, they feel tricked or deceived, and the photograph tends to lose some value in their eyes. I looked at this in the previous module when analysing Doisneau’s kissing couple as well as the posing and staging performed by the FSA photographers and Eugene Smith.

Of course there is staging, posing, contrivance or construction, whatever name you want to call it by, in any photographic image. The level of ‘honesty’ depends on how the image is pitched to the viewing public. In my practice, of course I attempt to make images that withhold or suppress my presence, but since the images are taken from usually quite close angles the person cannot have been ignorant of the fact they were being photographed and are therefore posing, playing a role. In my case this is compounded even more so by the fact that I never publish images without the prior agreement of the subjects themselves – they have approved the images as well. This editing during and post production means that somehow I am being ‘selective with the truth’; but if it means that the narrative ultimately gets the point across better, and the subjects do not believe I have somehow betrayed their trust or feel maligned by my choice of image, then I am okay with that.