Newhall also mentions Ben Shahn, whose images I had only really read about and not looked at in great detail. It is interesting to note that Shahn was first of all a painter, and as such his understanding of composition is two dimensional, which is a great advantage when composing photographs. This results in unorthodox cropping and juxtapositioning, creating very interesting dynamics, while this image of a blind beggar surrounded by posters and goods for sale has to be one of the earliest examples of postmodernist photography, along with the work of Evans. 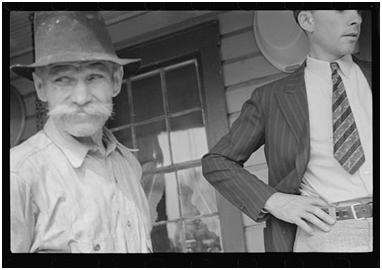 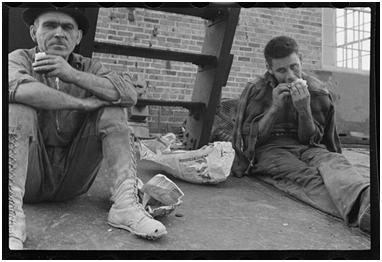 Obviously he was using a 35mm camera with a fixed (35mm?) lens, and shooting at times from the hip, at times shooting before formally composing, in a sense preempting the work of Frank and Winogrand. I had not really looked at Shahn’s work before, but am so happy that there is a huge collection of his negatives in the Library of Congress. As I have personally experienced with other painters turned photographers, Shahn has an intuitive way of using the frame, of composing:

It is not so much that the style owes more to painting, but the artist has seen beyond the subject matter (as thing to be seen) and simply used the elements to create a composition that is compelling and harmonious as well as immediate. Why is Shahn not revered as much as Lange and Evans, or even Rothstein for that matter? This is good stuff!

It is important to bear in mind that “documentary” is an approach rather than an end. Slavish imitation of the style of other workers is meaningless. (p 5)

Newhall’s argument is that by imitating the style of an original photograph or artist, the actual force of the original impetus is lost. This harks back to the Griersonian notion that documentary should not have a style in the aesthetic sense, but should rather be incorporated in the approach of the documentarian.