The next book Hevey looked at was Winogrand’s Figments from the Real World, which he says contains six images of people with disabilities – not as central subjects, but as secondary destabilising factor (enfreakment, since he did not challenge the system of oppression regarding their status). One of the images that Hevey deconstructs is actually one of my favourite Winogrands (I think it is one of the rare occasions where he ‘got it’). The women are shown as objects of desire, but something in the shadows has caught their attention: “All of their eyes are tightened and all of their facial expressions “interpret” the presence of the wheelchair user with degrees of controlled horror.” Hevey interprets the image to be a warning to these women (all vain people, for that matter): “He observes them as beautiful but warns them that their beauty and all its “paraphernalia” is all that separates them from the “grotesque” form they are witnessing. Beauty is warned of the beast.” Once again, is this not reading too much into the image post-factum? Of course Winogrand was photographing the women (that’s what he did), but was he really bringing “out of the underworld and into the shadows a symbol of asymmetry as fear and decay which challenges the three women’s right to walk “beautifully” down the street.”

Unfortunately, this is the only image that Hevey analyses, although he does mention that there are six in the book he selected ‘randomly’ from the shelves in a bookstore. I don’t have a copy of the book that Hevey mentions, but an online search turned up the results here. I don’t necessarily want to act as apologist for Winogrand, but I don’t think that he consciously enfreaked disabled people any more than he did any other people that he came across during his manic roving through the streets. He reacted to what he saw, and if that meant that there was some reaction to or interaction with a disabled person, he shot it just the same as he’d shoot other human interactions, as this photograph of a woman and a blind pencil peddler shows. The enfreakment was created without Winogrand’s mediation or intervention, it was already out there in society. In fact, one could argue that disabled people in Winogrand’s photographs are no more enfreaked than the other members of society he chose to aim his lens at:

These images are taken in exactly the same cynical manner as his broader body of work – society as a whole is made up of freaks, one could almost say, looking at his body of work. In my search I came across this image, where in a kind of role reversal the midget is looking at a woman as if she is something strange (probably as a result of the way she is dressed) and seems to be giving her a wide berth, even apparently walking out into the road to avoid getting too close; which of the subjects is the more enfreaked in this image is debatable: 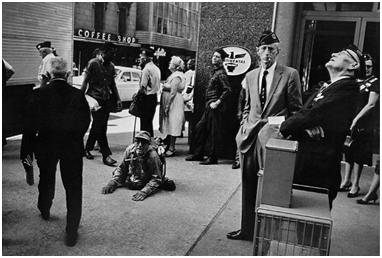 The only image I can find which truly fits the definition of enfreakment is this one of an American Legion convention in Dallas, but here the disabled person (what looks like a double amputee) is certainly the focal centre of the image and so contrary to Hevey’s initial premise.

“Like Arbus, Winogrand’s use of disability is to warn the “normal” world that their assumptions are fragile.” On this point, I agree to a certain extent with Hevey, but I also think that this was a particular trait of the New Documents photographers, following directly on from Frank, and it was not restricted to disability alone; these photographers, especially the two in question here, were enfreaking the whole of society. They were questioning the utopian world that Steichen had proposed, since in reality so much seemed to negate the fact that “everything was all right” in the capitalist consumerist world. Hevey makes the point that Family of Man excluded disability for the same reason that New Documents included it: it was viewed as regression as opposed to progress. Disability is included by the later photographers since it shows the disharmony of a decaying society, the alienation that they set out to portray.

The fourth book that Hevey claims to have picked out at random was Another Way of Telling. At the very beginning of the book, Jean Mohr recounts an episode that happened to him in India, where he began imitating different animals and watching (and photographing) the different expressions on the face of a local blind girl through the mosquito net that was over the window.

As Hevey points out, Mohr was impersonating animals since the girl was blind, and he noticed this and decided to take advantage of her handicap. “Underlying this was the assumption that blind people (whatever the level of visual impairment) have no idea of quantifiable physical reality and would, of course, think that the sound really was of a yapping dog waking up in bed. His joke reveals his disability (un-) consciousness, not hers.” Once again, although I do not approve of Mohr’s childishness, I think that Hevey has taken the affront very much to heart, as if by taking advantage of the girl’s blindness (or responding to it inappropriately at the very least) Mohr has personally offended Hevey. He points out that in contrast to the other essays by Mohr in the volume, this particular photo shoot did not last for hours or even days, but consisted of a few stolen moments, which is all that is needed to fix her timelessness; her symbolism as one who will never see. He does not consider her daily life important (as he does the other characters in his essays) because that would undermine the image of beauty that the laughing blind girl conveys. Drawing an analogy with the pictures of Arbus and Winogrand, Hevey observes that such “…images tell us nothing about the actual lives of disabled people, but they add to the history of oppressive representation“. Taking this on board, it would seem clearer now that Hevey’s main beef with such imagery is that they do not personalise their subject matter, but tend toward a generalisation about disabled people or disability, treating them as something that does not warrant discussion in or of itself, but that can be used to prompt discussion about other topics, hence he sees their denial as three-dimensional beings; they are lumped together as the Other.

“The repression of disabled people makes it more likely that the symbolic use of disablement by non-disabled people is a sinister or mythologist one. Disablement re-enters the social world through photographic representation, but in the re-entry its meaning is tied not by the observed, disabled people, but by the non-disabled observers.” This follows the pattern of colonial repression, as well as the repression of women in the media. Hevey seems to think that the photographers he has analysed use disabled people to further their own points of view within the larger discourse that is their body of work, this is what links their attitudes – disabled people are positioned as meaningless or meaningful (only as symbolic of a ‘naturalist humility’ or as ‘psychic terror’), “The disabled” emerge, like a lost tribe, to fulfil a role for these photographers but not for themselves.” They have been denied a voice, disempowered and so twice offended. This is the kind of thing that I really need to avoid and be aware of when dealing with disability. “The use of disabled people is the anchor of the weird, that is, the fear within. They are used as the symbol of enfreakment or the surrealism of all society.” Since the anticipated audience is non-disabled, the resulting images can be seen as the ‘voyeuristic property of their gaze’.

Hevey lists a number of photographers who have done work specifically on disability, but he bemoans their approach, which he says makes that of Arbus and Mohr seem quite timid in comparison. It appears I have to look up the following:

In discussing their work, he concludes that:

“...the photographic observation of disablement has increasingly become the art of categorisation and surveillance. Also, from a psychological viewpoint, those that appear to have transgressed this commodification of disabled people have only transgressed their own fears of their constructions. The oppression remains the same. The segregated are not being integrated, they are being broken into! The photographic construction of disabled people continues through the use of disabled people in imagery as the site of fear, loss or pity.” He argues for empowerment, which is precisely the angle that I am coming from – not to evoke pity or feelings of charity or repulsion, but to accept and acknowledge, which is all I can really ask from others.

If anything, this article has helped me to understand what is needed in photographs of disabled people, according to one who is disabled himself. Although I do not necessarily agree with him on certain matters related to the pictures taken by Arbus and more so those taken by Winogrand, I feel that some of his general ideas are perhaps worth considering in my approach to disabled people and how they are to be portrayed and ultimately perceived. In fact, part of the reason that I decided to focus on this particular subject matter came about as a result of collecting material for an article on a centre for disabled children, and the problem was the fact that the images themselves didn’t convey enough of what we (together with the parents) felt needed to be said; without text the pictures were still wide open for interpretation and did not provide the disabled people themselves with a vocal platform. Through this project I hope we can rectify and realise that.